We lost our 7 year old dog, Sydney, an Austrian Labradoodle, to Water Intoxication on July 30, 2017. 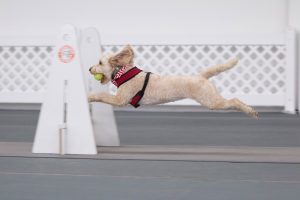 She was doing what she loved, jumping in the pool and retrieving her toys. She w 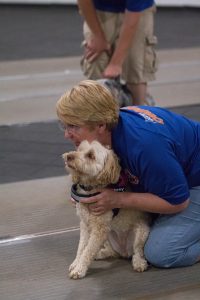 as the only dog I knew that would swim underwater. Evidently she swallowed too much water. We didn’t know it at the time, It wasn’t until she was out of the water for awhile. She started to stagger, then basically collapsed. We rushed her to the Emergency Hospital but she stopped breathing half way to the hospital. They did CPR and put her on a respirator. Eventually they were able to get her heart started for only a short while, but not her breathing. I didn’t know such a thing could happen.

Sydney was a great dog. I inherited her from my mother. She got a long with all dogs and she helped to train other dogs for our flyball team. She had two litters for a total of 7 puppies; she was a great mom. She loved flyball, swimming, hunting, digging and just hanging around with us. I am once again heartbroken.

My 6 ½ year old Whippet Mix, Baklava was just 14 points short of his Flyball Onyx Title (20,000 points) when he was diagnosed with Cancer in the Spleen and Liver. He was very lethargic and barely eating. I had figured it was Lyme disease and a quick round of antibiotics would fix him up, but I was wrong. They gave him only a week to live. 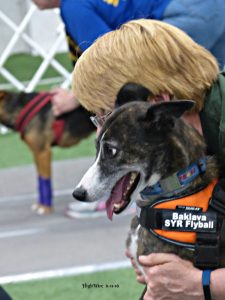 He continued to go downhill all week, and that weekend we had our next flyball tournament in Batavia. but I couldn’t leave him home. I knew he would be comfortable in the camper and his Vet, Allison Blakley, is on our team and would be there. Saturday morning, I had to drag him out of his crate to go potty and he barely ate. Saturday night he started to perk up. Sunday, our Multi team didn’t race until late in the morning. When I went to get Sydney, Baklava’s sub, he was at the door and wanting to go. He didn’t do this on Saturday. He knew we were playing flyball. So I dressed both of them and brought them in the building. Baklava moved better than he had all week, so we decided to let him try warming up. He did fine, but not fast. This was amazing considering just the day before I had to drag him out of his crate!  So he ran a few heats. It sure wasn’t his fastest. In fact, he was double striding the whole time and his times were almost twice as slow as normal, but he did the jumps and got the ball, even did his box turn. I was amazed and proud.  He earned his 14 points plus 21 more!  He earned his 20,000 points, his Onyx! The next race he stayed in his crate. It was like he wanted to do it just one last time. The rest of this week he was much perkier and more energetic than he’s been since the diagnosis but today, Thursday he started getting lethargic again.

There was one more surprise!  The hosting team’s name is Tenacity and their moto is “We are Determined to have the Courage to Believe in what we can Achieve”.  This is what they posted on their Facebook page:

“Flyball comradery was at its best as peers lined up and watched team Syracuse’s very own Terri and her dog, Baklava, to get his Onyx. 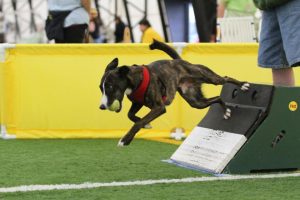 Baklava was terminally sick and was estimated to pass within a week. He just needed 14 measly points to get it. Luckily, Sunday the team had a bye as they would be racing themselves. As the first heat ended, the time was over 24 seconds. The wind came out of everyone in the building and the water works continued. In the second heat, the lights didn’t work and was given an estimated time. The suspense was building. The third heat arrived and was clean with working clocks! Baklava ended up with 35 points!! The crowd erupted!! Everyone smiled, hugged, and cried.”

“This was a ‘memorial’ moment at our “Make it Memorial Day” tournament and thus, we at Tenacity are creating an award in Baklava’s honor as he showed, “he was Determined to have the Courage to Believe in what he can Achieve.”

He hung in there 9 days longer than they thought he would and we made the best of every moment. He lost his battle, Monday, June 5, 2017. I bet he’s found some old friends who have gone before him and are playing flyball over the rainbow bridge.